Leptin resistance may be responsible for elevated leptin levels in obese women with polycystic ovary syndrome, according to authors of this study.

Susanne Hahn and colleagues in Germany discovered a link between soluble leptin receptors (sOB-R), leptin resistance, and obesity in polycystic ovary syndrome (PCOS). Click through the slides above for details on their study and take home points for clinical practice.

PCOS, Insulin Resistance, and Obesity. PCOS is a common endocrine disorder that is associated with peripheral insulin resistance that impacts reproductive-age women. PCOS increases risk factors for cardiovascular disease and most women with PCOS are insulin resistant and overweight or obese. Studies have shown that sOB-R correlates inversely with total serum leptin levels and BMI in reproductive-age women. Authors of the study sought to analyze the correlation between sOB-R, obesity, leptin and insulin resistance, and other endocrine parameters in women with PCOS. 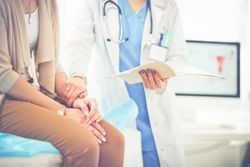