Parting with a Partner is Hard to Do

My partner is leaving in December. She asked me not to be angry; not to hate her. I said I couldn't and wouldn't -- but to ask me again in January.

I wasn’t completely forth-coming in last month’s blog entry. While I said I had been mulling over whether or not to hire a new associate, there is actually an imminent reason I have to consider hiring a new associate. Two months ago, my current associate came to me, tears welling in her eyes. I knew it before she even said it.

She found a better opportunity in another town. Her family believes this will be better for them. I sat quietly and asked a couple of questions. Where exactly is she going? When is she leaving? She said I was taking it surprisingly well. I said I had to be objective and make plans; I didn't have the luxury to be emotional right then. She asked me not to be angry. Why should I be angry?  Would that make her stay?  And not to hate her. How can I hate her?

Nine years ago, I was exactly where she is now. After working for a faculty practice for 8 years, I walked into my senior partner’s office and told him that I had to talk to him. Then I broke down and cried. I think it freaked him out. He was sure something horrible had happened. I told him that I had given it a lot of thought and I had decided that I wanted to leave and go into private practice. I can’t quite say what exactly was the deciding factor, probably a change in the work environment and culture coupled with a growing desire for autonomy. I had done my research. I had a business plan. I was (mostly) certain it was the right thing to do for me, my sanity, my family. So why did I cry?  As I explained to him, it’s like you’re breaking up with someone. You know it’s what you have to do, but you are leaving behind part of your life, part of your past, and you worry about who is getting hurt by your decision.

So, off I went into the uncertain waters of solo practice. But I was only solo for a year. I hired a new associate. Someone I knew, someone I had helped train. She has been with me for 8 years. Eight years, how ironic.

I had been hoping to start cutting back on my hours, just a little, so I wasn’t so frazzled and stressed. Just enough to prevent impending burn-out. Now I have to decide, do I stay solo or do I look for a new associate?  For now, I am going to absorb some of her patient population. Then I have to decide, can I keep seeing new patients? Do I limit my scope of patients? To keep my sanity, do I cut back on how many patients I see a day? Do I have a mental health day periodically?  Do I keep buying Mega-millions tickets so I can retire early?

I have a huge transition period coming up. She leaves the end of December (I have a trip that I had planned over a year ago and she was gracious enough to delay her departure until I get back). Right now, it almost doesn’t seem real. Everything is still business as usual. So no, I don’t hate her.

But I told her to ask me again in January. 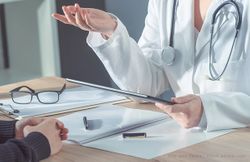 For now, it’s life as is for this solo endocrinology practice

Reflecting on 10 Years of Solo Practice